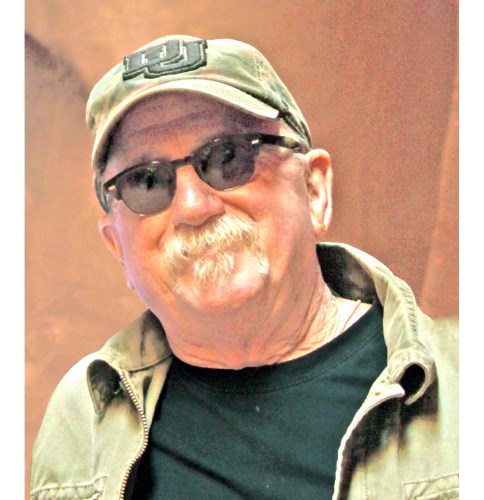 BORN
1948
DIED
2021
Paul "PT" Wade was born August 26, 1948 in Cleveland, Ohio. He passed away peacefully at home January 9, 2021 surrounded by his family and ever-loving friends after complications following a bilateral lung transplant in which he referred to as his new carburetors. He fought a hard, admiral battle and stayed true to himself with his wonderful array of eye rolls for every emotion, until the very end. PT proudly served in the U.S. Army as a helicopter crew chief in Vietnam. During this time he developed a lifelong brotherhood that few men have the privilege to understand. He loved his brothers, and like true brothers do, they remained by his side until the final days.

In 1979 he moved to Durango, Colorado where he would later meet the love of his life, Joann and her two beautiful daughters. During this time, PT and his friends had a company, Amigo Painting and Paper Hanging, boasting the finest painting and paper hanging in all of La Plata County. He and his beautiful bride Joann later would transition

to a job as property managers for a ranch just north of town for more than 20 years. Then in July of 2000, a momentous and joyous occasion occurred when PT officially became a daddy, through the adoption of Jessie. While this made it legal, he had been raising her as his own since the age of two. He truly loved his family deeply and above all else.

Outside of work and in retirement, PT enjoyed skiing and traveling with his wife and dog, Miles. Together they visited all 50 states and many national parks. Of all the places he traveled though, his favorite place was at home in Colorado. He was a proud 40-year member of AAA an active part of the local Vietnam Era Veterans Association (VEVA) where he served his fellow veterans tirelessly and selflessly.

PT was preceded in death by his sister, Ellen, brother, Harvey, mother, Awilda, and father Gilbert. He leaves behind his wife, Joann, daughter Cindy and her husband Jeff, daughter Jessie and her husband Ben as well as his four grandchildren, Anna, Kaitlyn, Meredith, and Zach. He has also left behind piles of lists never to be completed, the most excellent collection of overpriced flashlights the world has ever seen, and enough ammo to supply a small army and just might.

A celebration of his life will be held at a later date when friends and family can gather together to share stories, hugs, and maybe even a shot of whiskey.

In his honor please consider a donation to the Vietnam Era Veterans Association, 1523 CR 243, Durango CO 81301.

Published by Pine River Times on Jan. 25, 2021.
To plant trees in memory, please visit the Sympathy Store.
MEMORIAL EVENTS
To offer your sympathy during this difficult time, you can now have memorial trees planted in a National Forest in memory of your loved one.
MAKE A DONATION
MEMORIES & CONDOLENCES
5 Entries
My sincere condolences to Joann and her family. May God’s love comfort you, his light guide you in the difficult times ahead, and his peace dwell in your hearts. Take care.
Tim LaFrance
February 19, 2021
Tom and I have always enjoyed P.T.'s sense of humor, and friendship. We are so sorry to hear of his passing. Our heartfelt sympathy goes out to Joann and the girls.
Thinking of you all,
Sue and Tom of Durango Nursery
sue herlihy
Friend
February 4, 2021
Barbara and I will miss you so much, thinking about you Joann and family. He was my brother in arms and always will be. Take Me Home Huey.
geno sciaraffa
Friend
January 30, 2021
Paul was a long time customer of North City Market where I worked for many years. He was just a super nice guy! Always had a smile, and if he couldn't personally say hi he always waved! I will definitely miss seeing him around, and I'm proud to have known him for so long! RIP Paul! Fly with the Angels!
My condolences to Joann, his Children, Grandchildren, and extended family!
Annette Somsen
Friend
January 26, 2021
Haven't seen you in years PT. Rest in Power old friend. JoAnn and family, I send you love and strength. May your grief be gentle, your memories long, and light shine upon when he smiles at you from above and sends a rainbow now and then. Much love in this hard time.
Cindy Conway
Friend
January 26, 2021
Showing 1 - 5 of 5 results