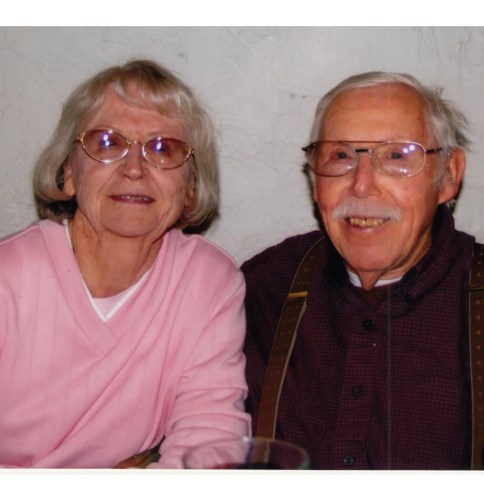 BORN
1926
DIED
2021
Marie Hunt left this world on October 6, 2021 to be reunited with Roger, the love of her life. Marie was a special woman who never met a stranger and had the ability to talk to anyone.

Marie was born May 17, 1926 in Greybull, Wyoming to Harley and Charlotte Wilkinson. Harley was a steam fitter, so the family moved throughout Wyoming and following large construction jobs, therefore Marie attended many schools growing up. It was during this time that many of her life passions developed. One was reading, an enjoyment she continued all through life loving history, mystery and romance novels. Another was politics which developed in her school years and continued as an adult from PTA to being an election judge. She graduated from high school early and attended University of Idaho. During a break from college she traveled to Los Alamos, New Mexico to see her family, where her father was working for the War Department. It was here that Roger swept her off her feet, at an on-base dance. Roger was in the Army Corps of Engineers working on the atom bombs and Marie got a job working with the University of California in the blue print labs. They attended many more dances, fell in love and were married in Santa Fe, New Mexico on June 22, 1945.

They were blessed with 4 children, Doug (Dolores), Jene (Fred) Klatt, Darryl (Teresa) and Randy (Robin). One of the greatest joys of their life together was raising their children and helping raise their grandchildren.

Marie and Roger were very proud of their children and thank them for being so good to them in their old age. Their wish for them is to be as lucky in their lives as they had been.

A private celebration of life will be held at a later time. Marie and Roger will rest in Durango, Colorado's Greenmount Cemetery, near the Hunt and Klatt families. The family wishes to thank everyone who has been a part of the marvelous woman's life, along with her husband, in their life-long love affair, now we are sure they are dancing again.
Published by Pine River Times on Oct. 12, 2021.
To plant trees in memory, please visit the Sympathy Store.
MEMORIAL EVENTS
To offer your sympathy during this difficult time, you can now have memorial trees planted in a National Forest in memory of your loved one.
MAKE A DONATION
MEMORIES & CONDOLENCES
1 Entry
Marie and Roger were special friends. Each time I saw them brought a smile. The amazing life events which both shared so easily, will be carried on by the family they loved. Sadness is in my heart for my and the family's loss, but happiness knowing they are dancing once again. Lloyd Percell
Lloyd Percell
October 15, 2021
Showing 1 - 1 of 1 results